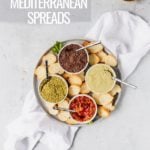 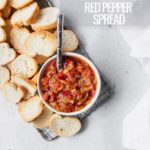 This melt-in-your-mouth jammy tomato-onion spread is absolutely worthy of a 1-hour simmer. It’s a delicious appetizer all on its own served with crackers or crostini, or as an addition to a cheeseboard. Or, add the savory spread to sandwiches or mix into eggs.

Here we are: the final recipe, or could you say the final four(th)? I suppose this Jammy Tomato Red Pepper Spread doesn’t need any attempt at dad-joke cleverness. It shines all on its own.

By the time we first had something similar in Nice, we’d had our fair share of olive tapenades and had been loving them. Then this really rocked our world.

It’s not really a tapenade since it’s not made with olives, or capers, or any of those briny things. But it is similar in that it finds its place on the table just before the main courses, as an appetizer. And it’s so perfectly spread on top of little crostini that it makes your heart sing.

I honestly don’t know the real name of this sort of spread, or if there is one. I’m sure there’s one, and I’m sure that little restaurant in Nice had some sort of name for it. Many times in France we just saw it on the menu paired with the artichoke tapenade/spread as “tomatoes and red pepper” or “tomatoes”.

So I guess it could be tomato spread. Or red pepper spread. But it’s the combination that is important. And the jamminess. Ohhhh, the jamminess.

FRIENDS. Tomato Red Pepper Spread is THE spread of spreads and it needs to be on every cheese board or appetizer extravaganza from here on out, ok?

It’s a simple mix of onions, tomatoes, red pepper, and of course some garlic. They slowly simmer together with some olive oil – at first, covered, and then not – for about an hour. Before you click that little X at the top, IT IS WORTH IT. I promise.

It’s a pretty hands-off hour, too. They simmer and break down and become this luxurious combination of creaminess, and jamminess, and all sorts of levels of savory.

How should you serve this tomato red pepper jam spread? Not only is it amazing by itself on a crostini, but it would make a dynamite addition to sandwiches (like, hello Ultimate BLTs or grilled cheese), quesadillas, or even thrown in a hearty salad.

Hear me: the possibilities are endless. 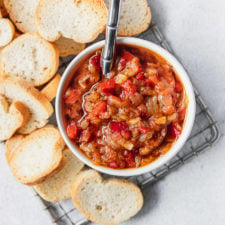 This melt-in-your-mouth jammy-like tomato-onion spread is absolutely worthy of a 1-hour simmer. It’s a delicious appetizer all on its own, spread on a cracker or crostini, or as an addition to a cheeseboard.
4 from 4 votes
Print Pin Rate Save Saved!
Course: Appetizer
Cuisine: Mediterranean
Prep Time: 10 minutes
Cook Time: 1 hour
Total Time: 1 hour 10 minutes
Servings: 6 sevings
Author: Becca Mills

To store, place in an airtight container in the fridge. The olive oil will solidify, so when you want to eat it again, just bring it back to room temperature and stir.  This recipe makes approximately 3/4 cup.

Did you make this recipe? Please leave a star rating and review in the form below. I appreciate your feedback, and it helps others, too!
146 shares
Previous Post: « Artichoke Tapenade
Next Post: Watermelon Granita Mocktail » 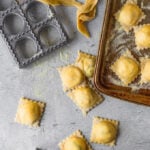 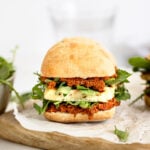 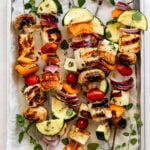