My wanderlust caught up with me again. 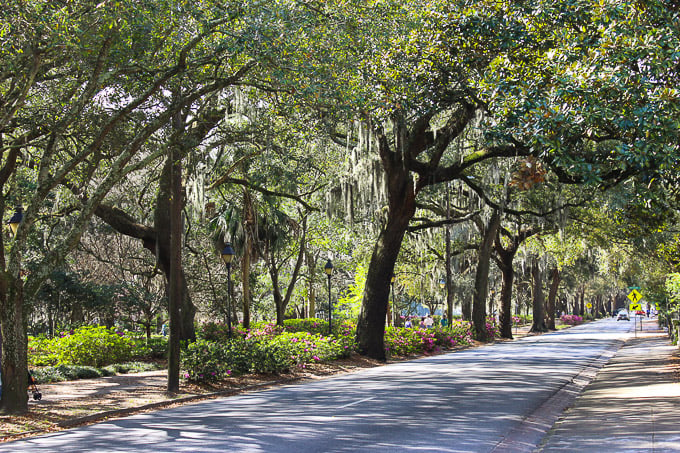 To be honest, it’s always there, but I can usually keep it under wraps pretty well, considering the time and money factor.  Until I couldn’t.

When I realized I could take some time off from work, J had some free days since he had an upcoming training, and said training would last six weeks, I just about jumped out of my seat with the idea we should go to Savannah. 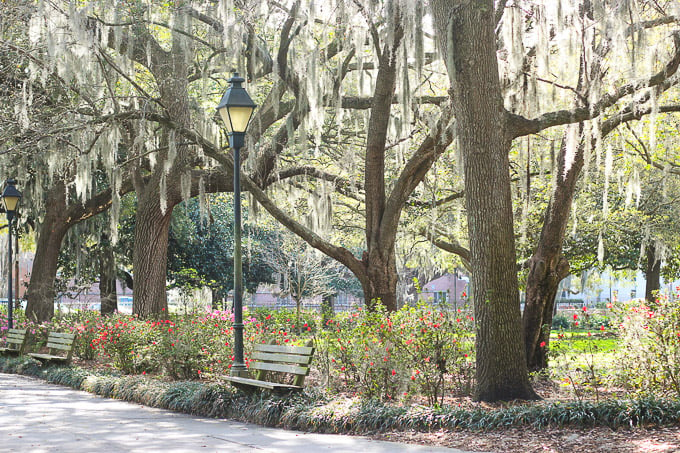 Savannah was high on my list of places to go since we moved to North Carolina; with it being relatively close, how could we not?  I just can’t believe it took us this long to get there.  I was immediately captivated by cobblestone streets, the architecture, and the amazing oak trees everywhere. 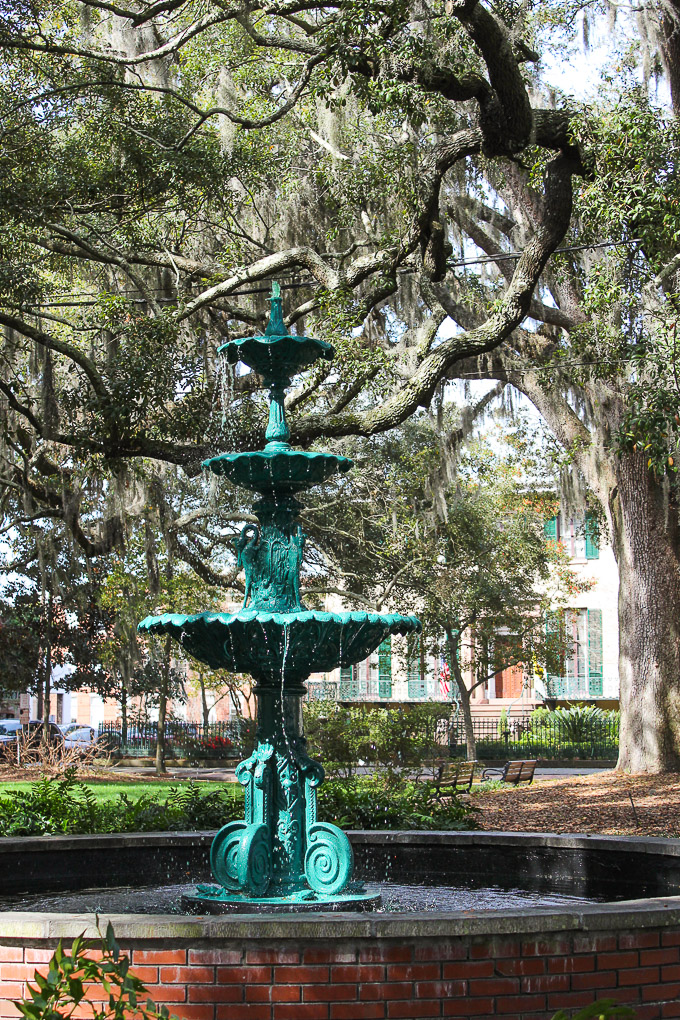 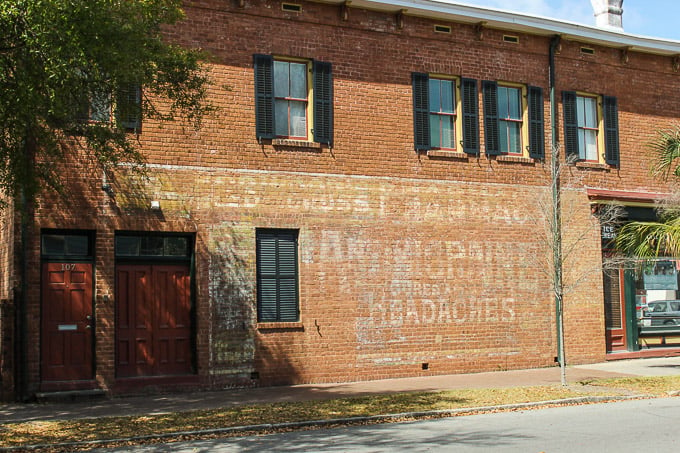 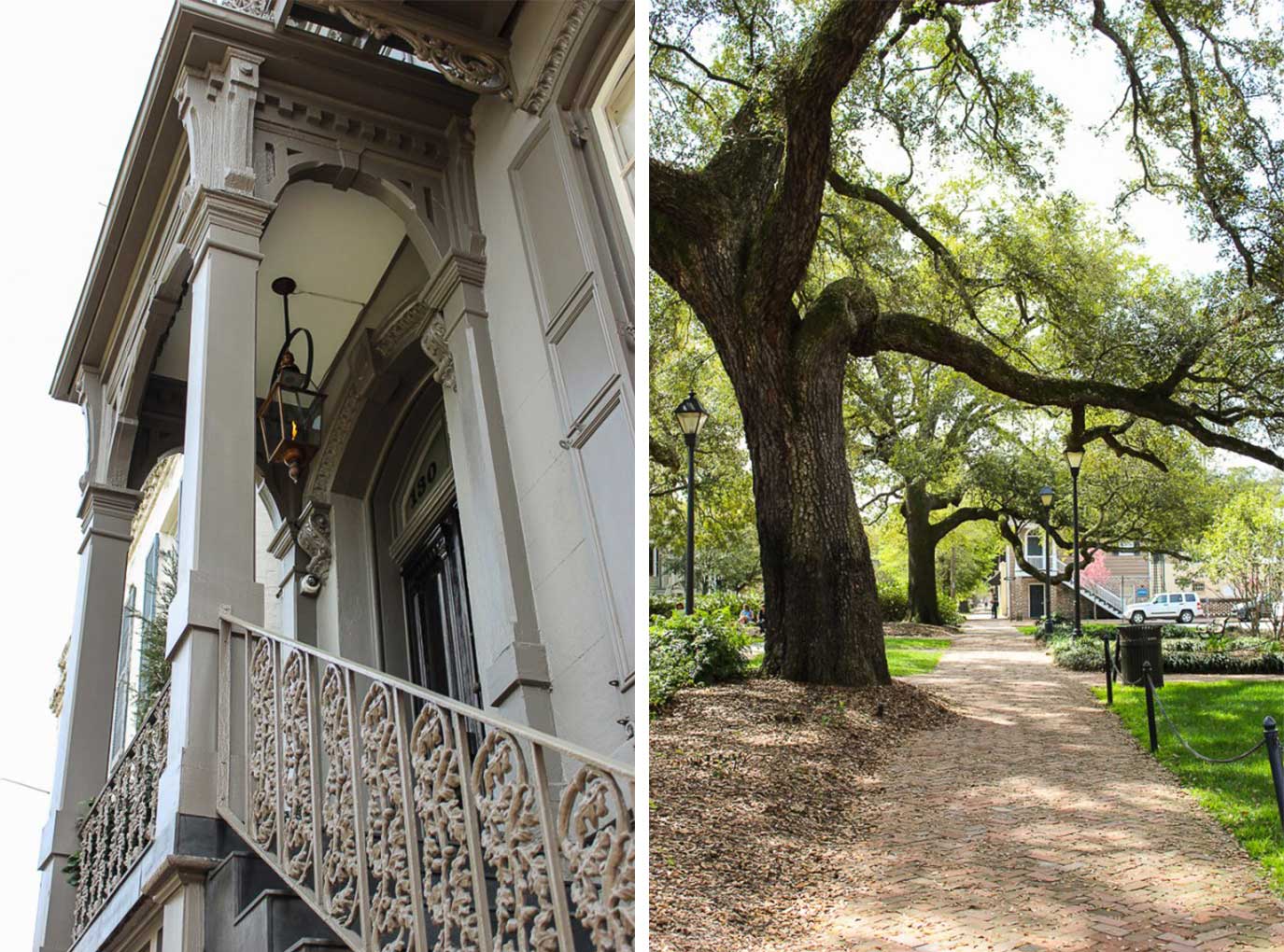 And the squares – more than a blocks worth of grass and trees and benches and statues and fountains – not just one, but 24 of them!  Or was it 22 that are still there..?  Either way, that’s a lot, and I could spend days and days walking around the blocks of Savannah, stopping in each square, and taking in the neighborhood, houses, and fresh air. While also imagining that I live in those gorgeous houses, with my dream kitchen and front porch, where I’m able to jog around the square after taking my freshly made bread out of the oven.  Haha, who am I kidding, I don’t jog. 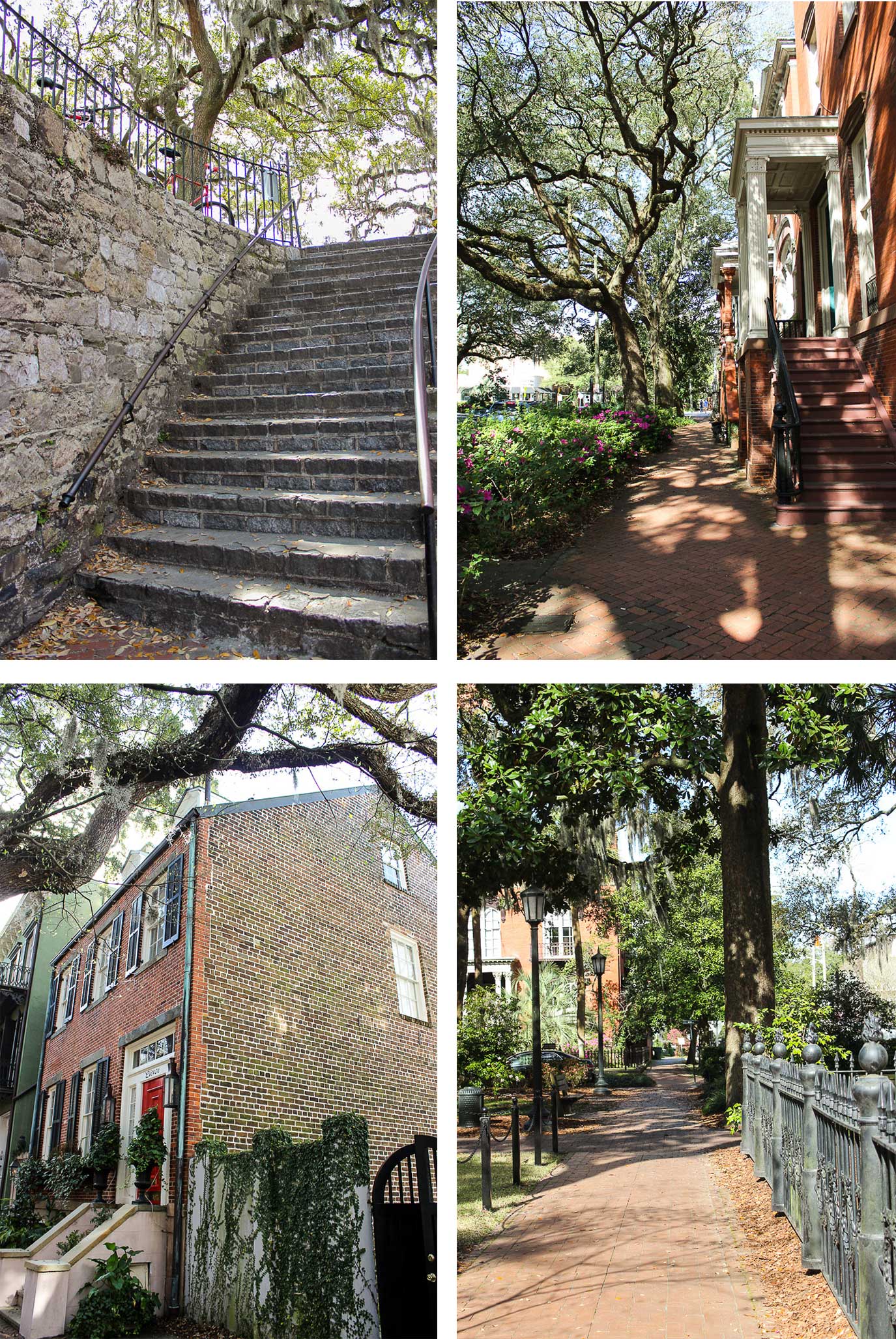 Since we only had a short time in Savannah, we decided to take a hop-on-hop-off trolley tour to get our bearings.  This actually worked out perfectly considering our time crunch and lack of Savannah knowledge.  We hopped on at 9am in City Market, which was super close to our hotel, and made our way around the city, stopping at every few stops and exploring on foot until hopping on again.  I’d recommend this if it’s your first trip to Savannah! 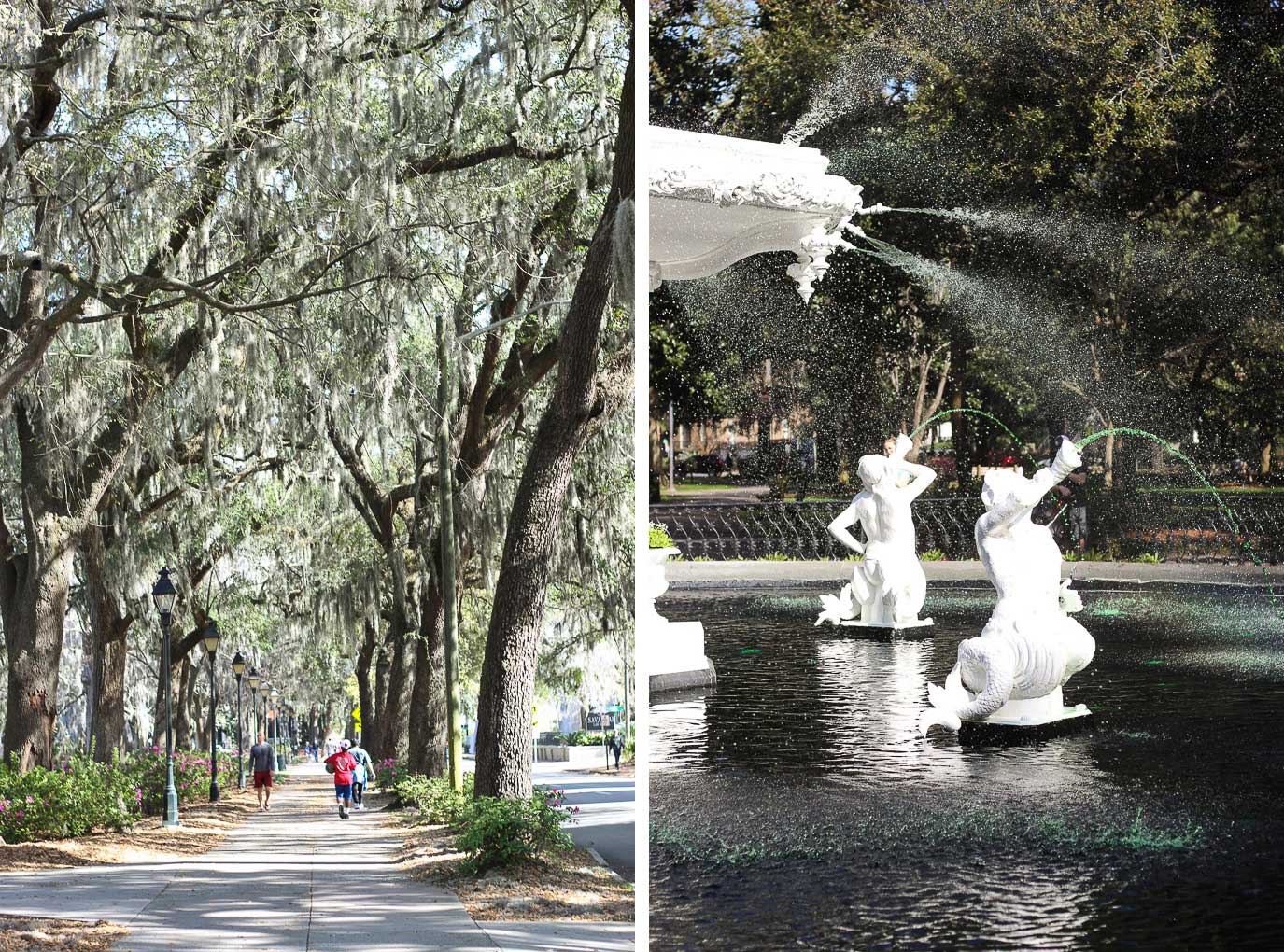 Cathedral of St. John the Baptist was one of the stops along the way… 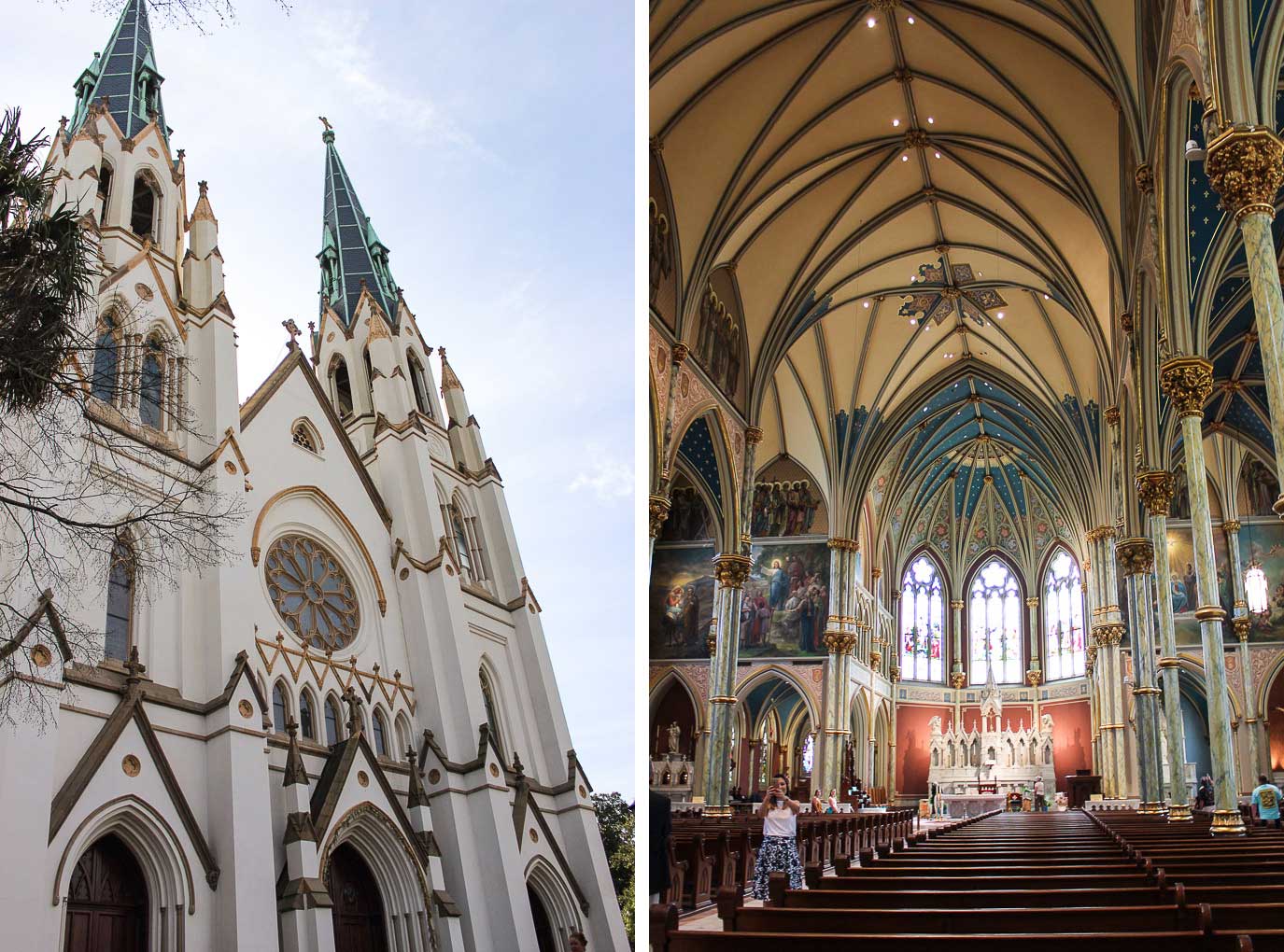 After exploring the city, we ended up back in City Market, an open-air market with blocks of shops, restaurants, and music.  One of my favorites was The Ancient Olive, where we sampled infused olive oil and balsamic vinegars, and my head was spinning with recipe ideas while my taste buds danced.

One of the best things about Savannah when you’re parched and need a quick rest, but want to stay outside and enjoy the live music?  No open-container law, which means you can get Georgia Peach Sangria to-go.  WINNING AT LIFE HERE, FRIENDS. 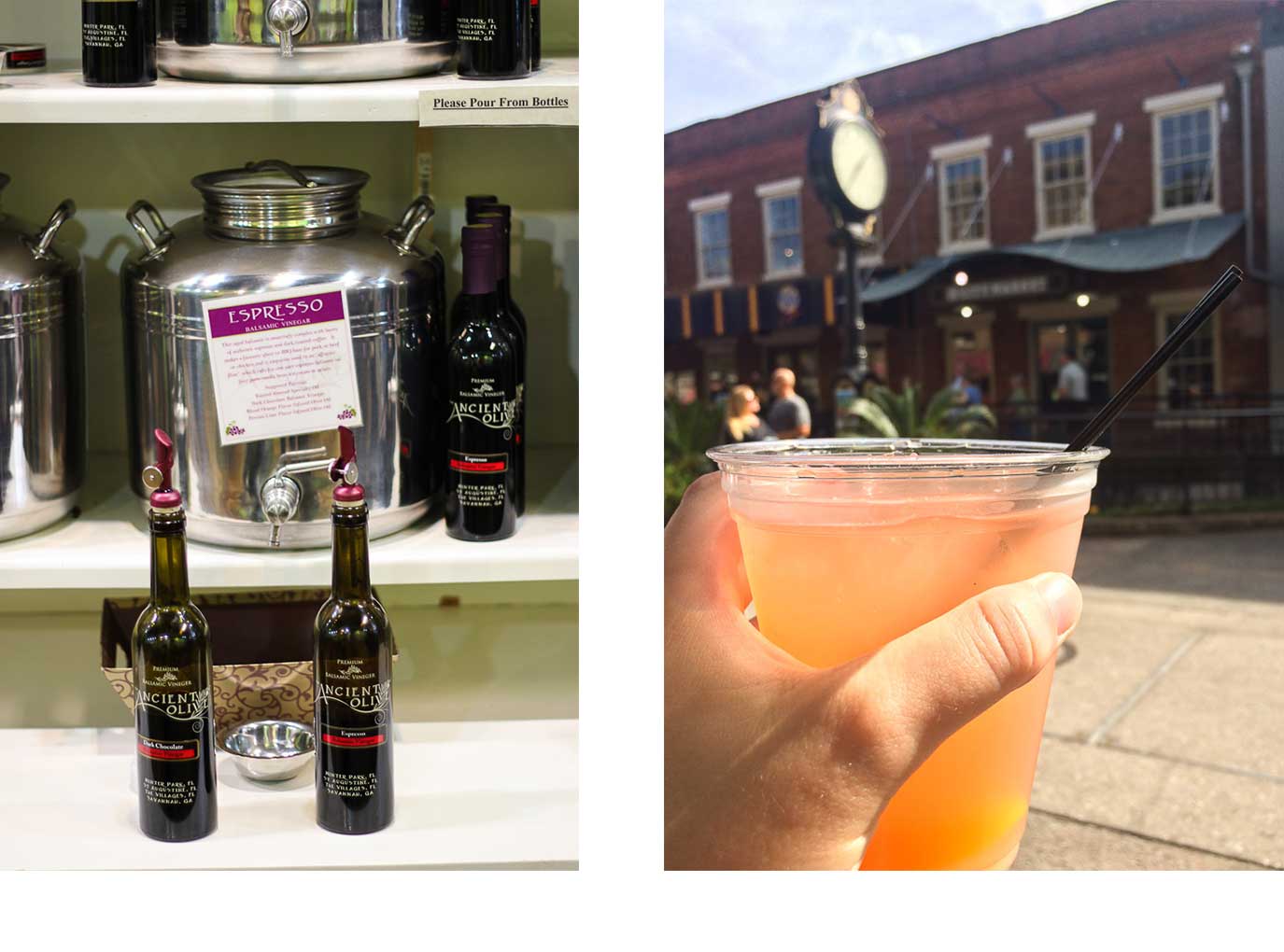 We headed to Tybee Island the second day in Savannah and toured the lighthouse and museum. 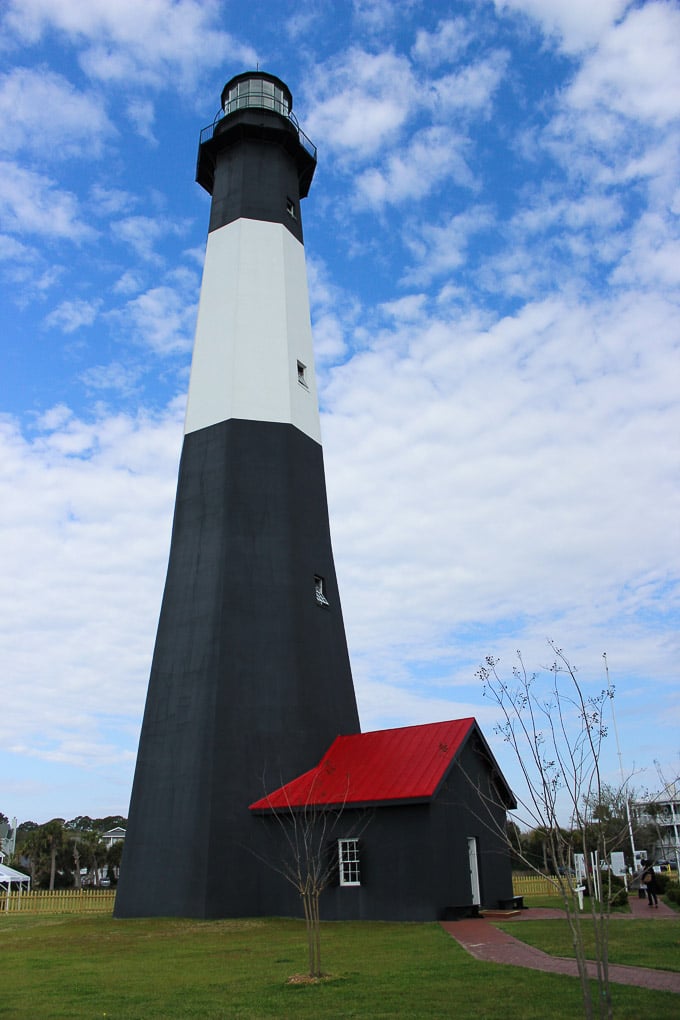 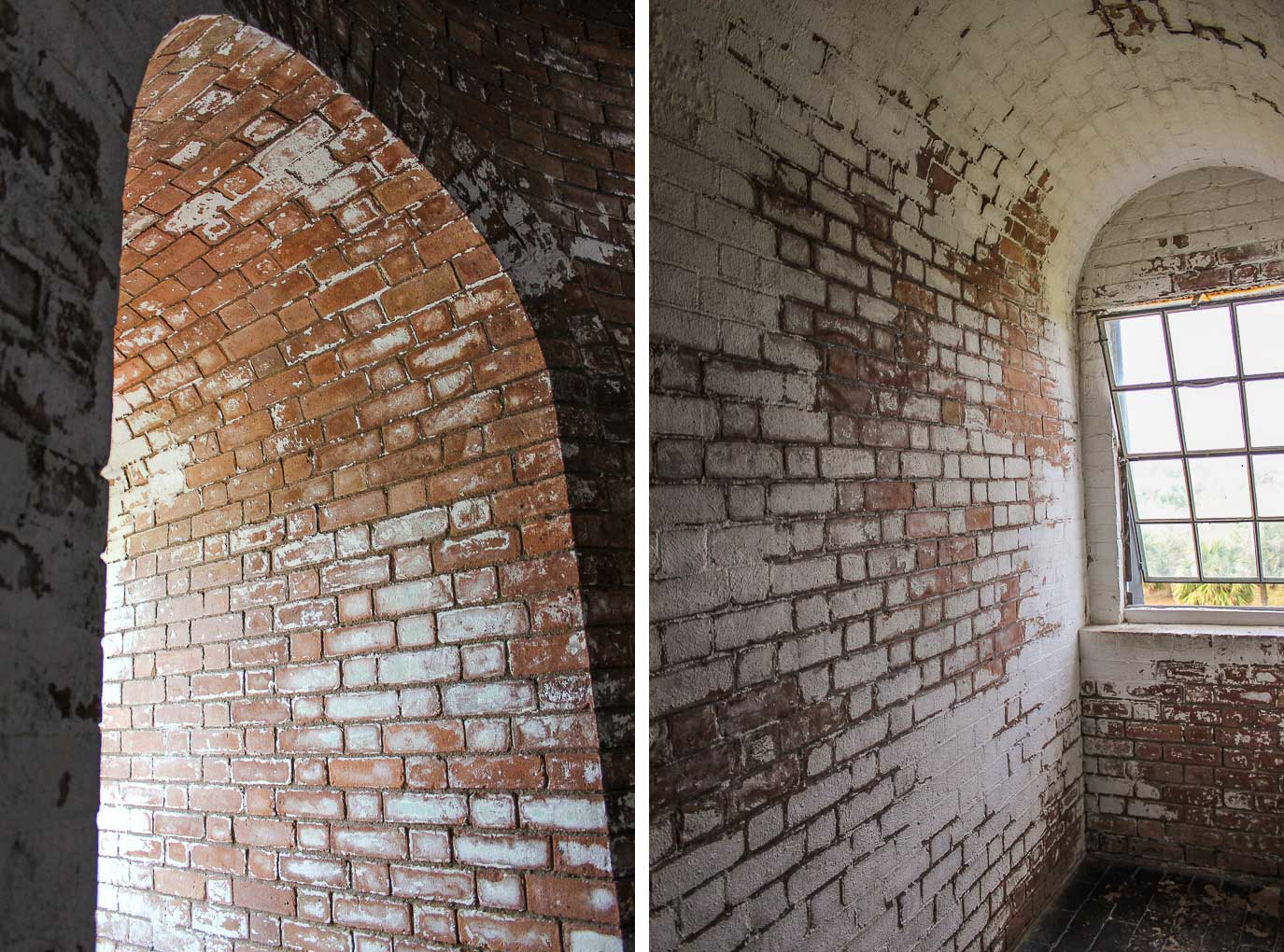 I hadn’t given my fear of heights much thought until it was too late.  At least it wasn’t as bad as in Asheville, let’s be real. 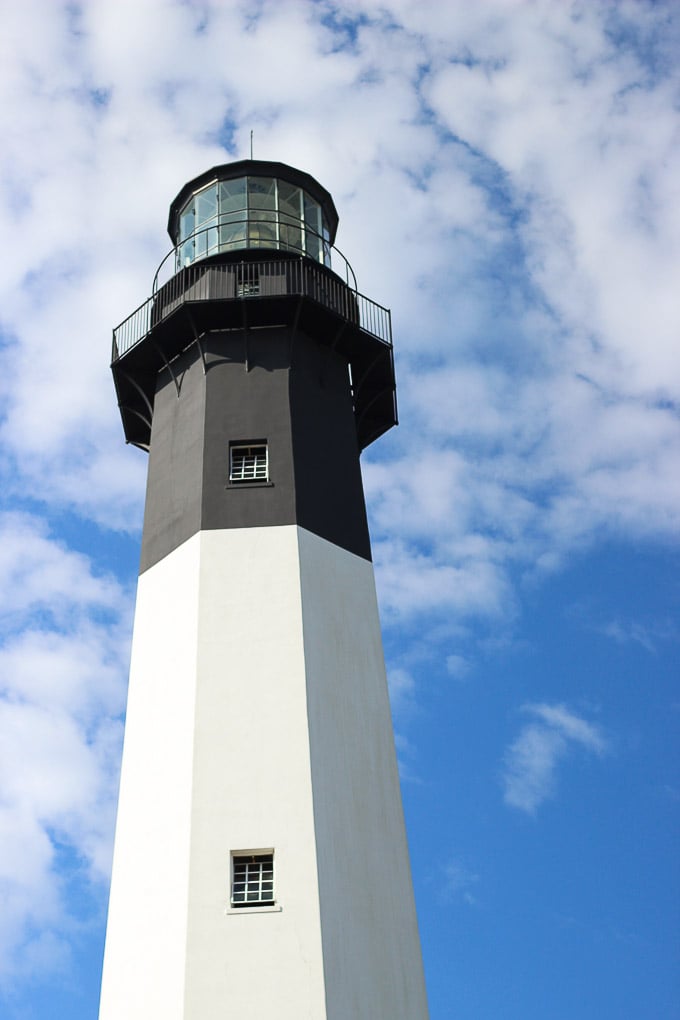 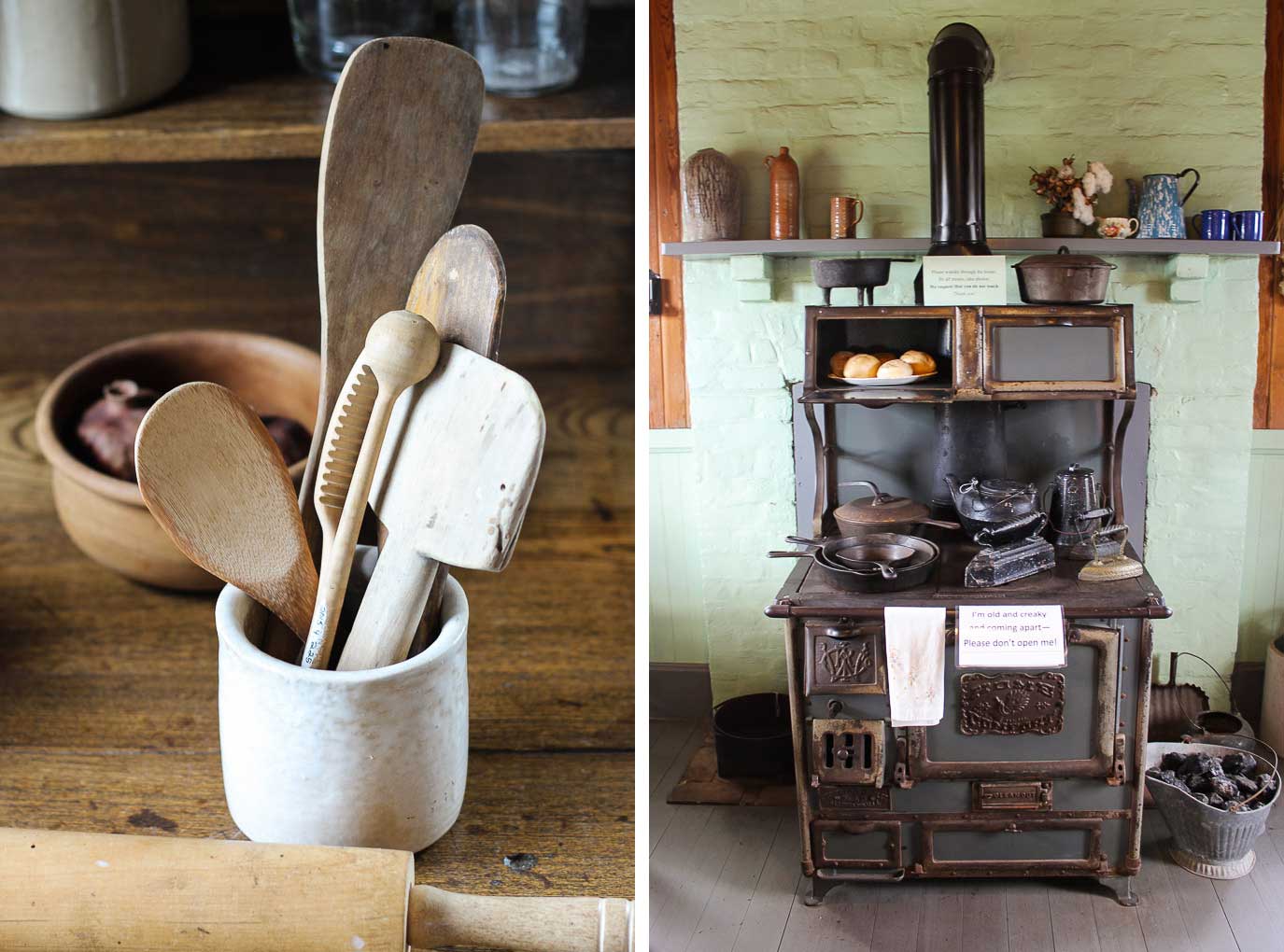 After conquering more fears, we stopped at this cute little….I don’t know what to call it.  It was like a parking lot you turned into, lined with adorable houses that were actually little shops.  We really stopped for the coffee (coffee shop not pictured), so I could consume my second breakfast.  See below.  Almond Croissants are LIFE. 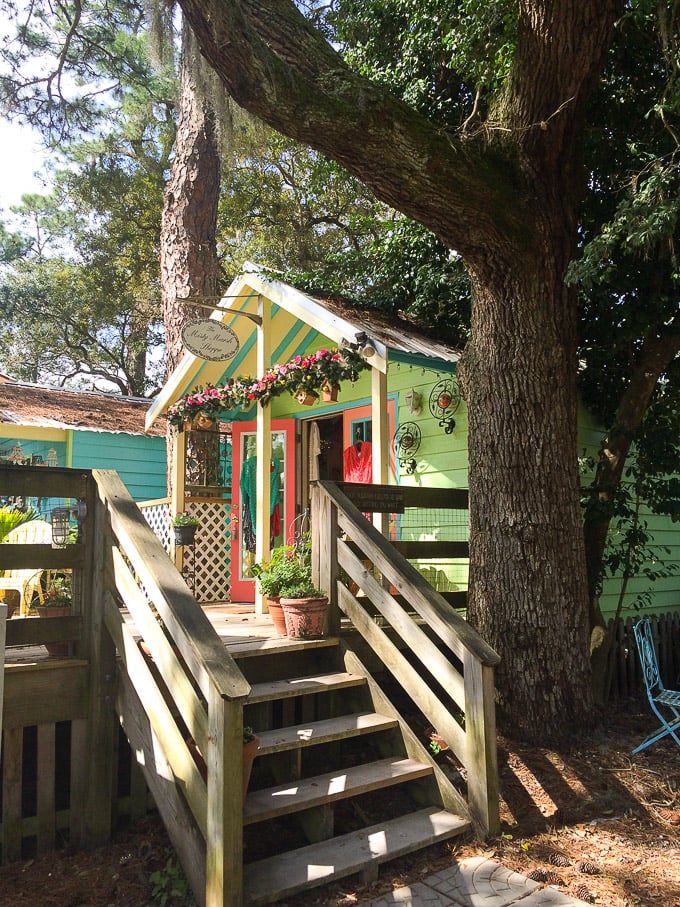 We, or should I just say I, approached this vaca a little different than the rest.  Considering all of our recent laundry expenses, we finally pulled the trigger on going at the last minute (when we were singing hallelujah about not needing to buy a dryer!).  So while I did ask around for a few Savannah recommendations, I didn’t go crazy researching restaurants, as I, uh-hum, may have done in the past.

As we, again I should say I, drove the long drive down, J did some research on our first dinner in Savannah.  And he could not have done better.

This was just what I needed on our first night in Savannah; I craved inspiration, delicious food, and not “typical” southern food. While there was a “lowcountry” flare, I didn’t feel like I was swimming in fried chicken and ham biscuit options.  Not that there’s anything wrong with those, it’s just not what I wanted to eat for 3 days straight.

I had the sea scallops with a pea and carrot risotto, served alongside a ginger carrot reduction, sweet pea coulis, and some shiitake mushrooms.  SO. GOOD.  J had a meatloaf of sorts, that included foie gras and filet mignon, alongside a cauliflower mascarpone puree – definitely on my list now! 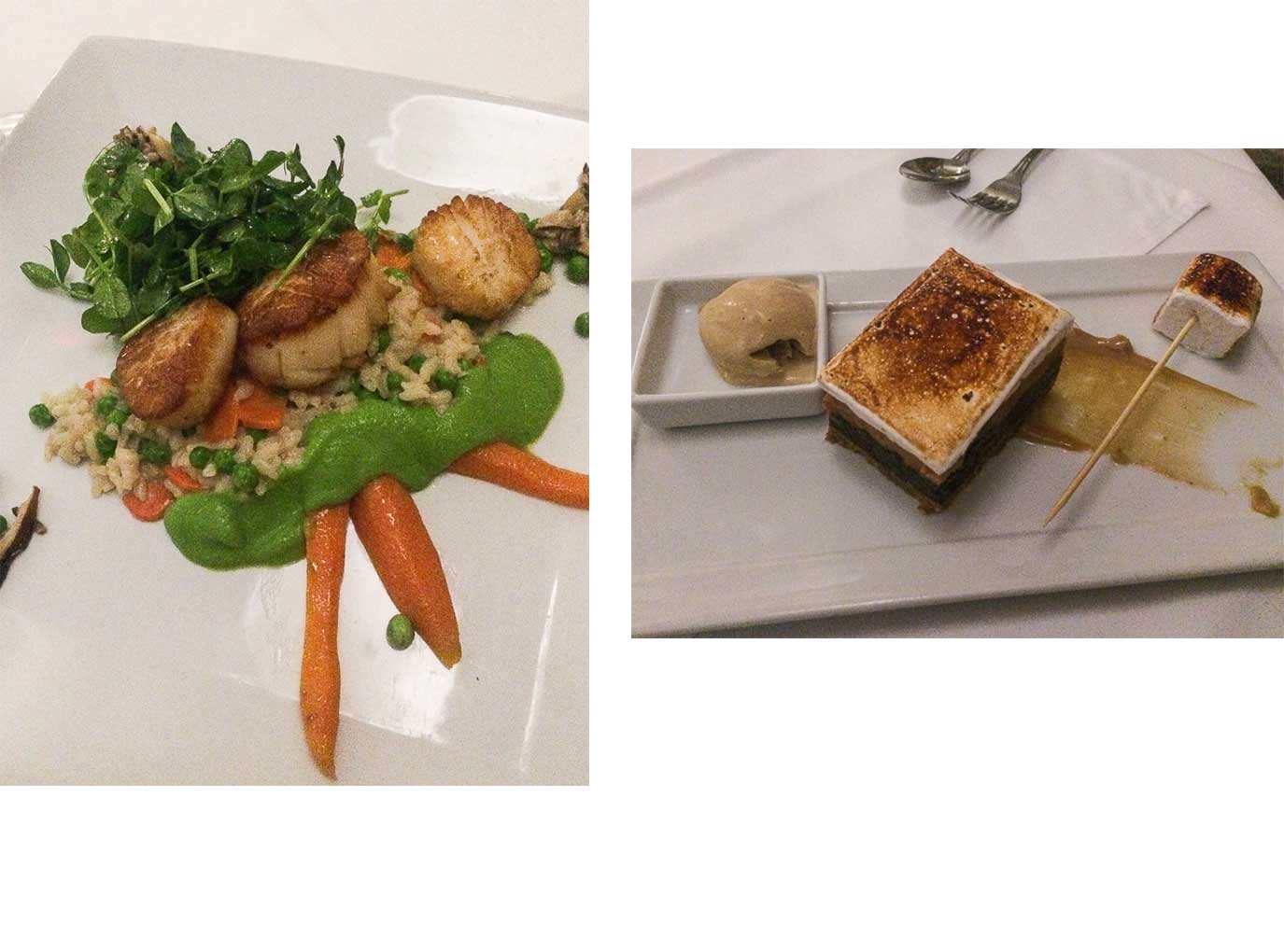 Need I say much about ICE CREAM?  It’s handmade onsite; there’s just no arguing with that. 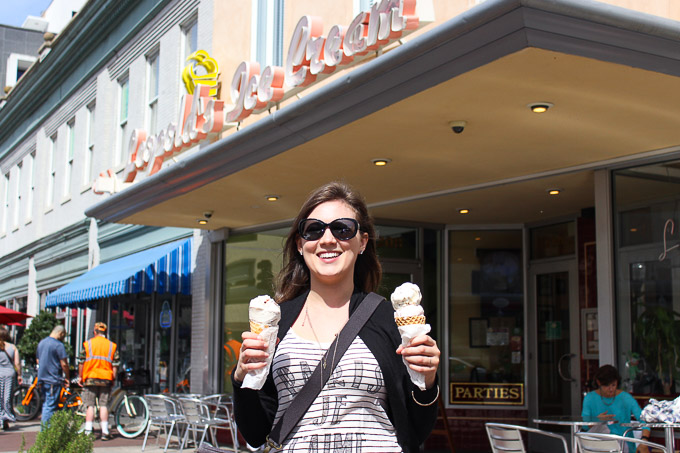 This gem is probably the number one reason I’m glad I didn’t plan the eating schedule to a T.  While we most likely would have ended up at the previous two establishments, this French cafe was found by chance as we sat on a park bench, hungry, and needing a good bite to eat.  Of course seeing a French cafe nearby on Google Maps was an immediate “YES!  Let’s go.  Which direction?”. 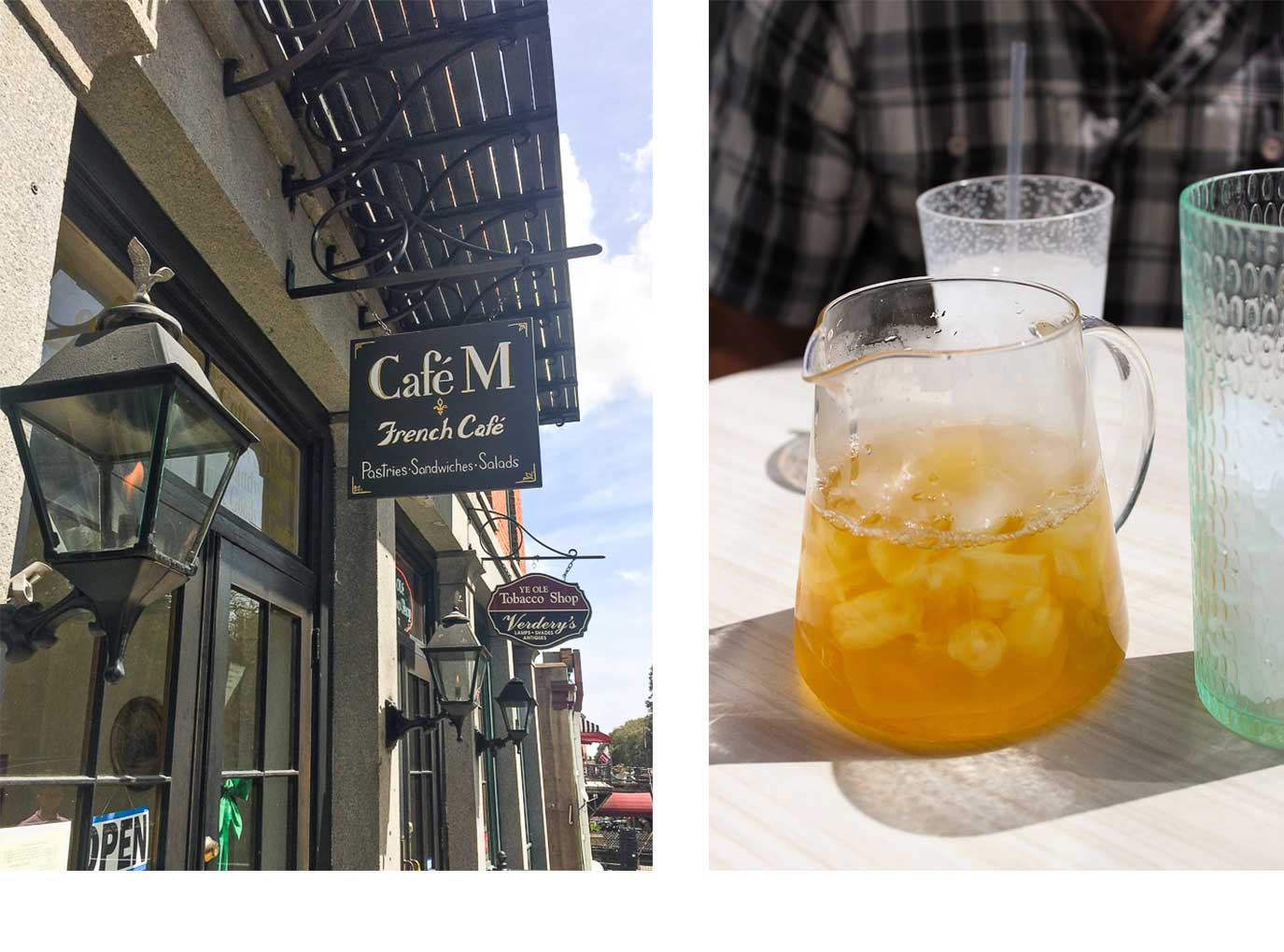 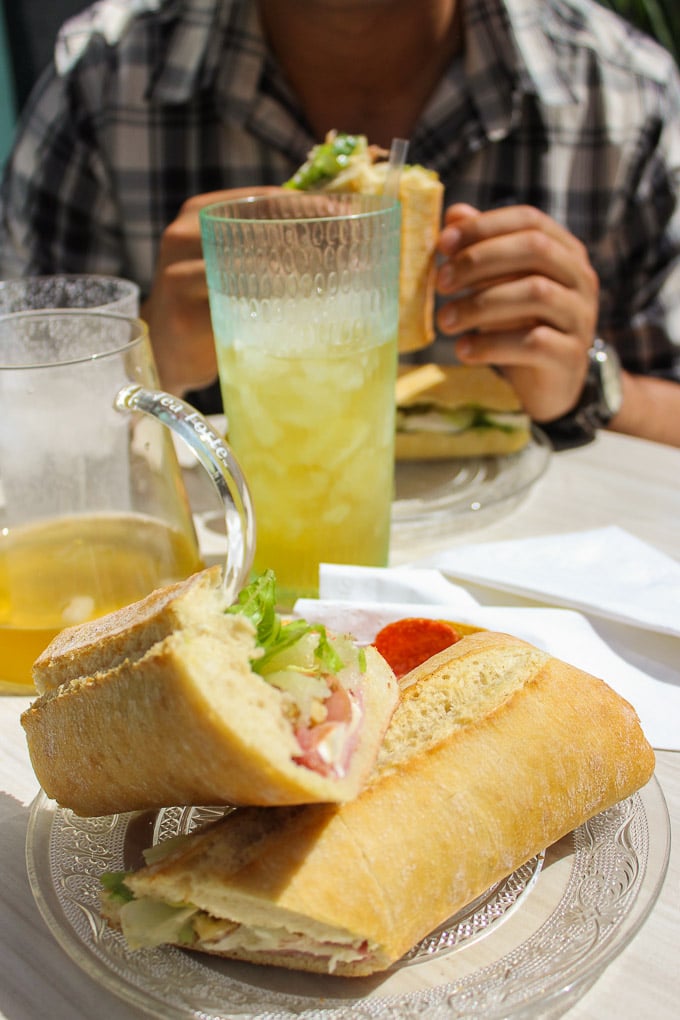 I could’ve eaten everything in there.  But my gigantic baguette (fresh. baguette.  I think I was in heaven) just wasn’t going to allow that.

We ended up at this underground tapas bar by recommendation and because we ended up walking past it.  They have a pretty generous Tapas For Two option – I was able to share with J, and that’s saying a lot.  Unfortunately we were earlier than the live music, and left before it started (ok, we’re truly old people at heart), but had we planned I’m sure we would’ve planned our dinner time a little better to enjoy the music.

Just what we needed for a quick breakfast – and FRESH CROISSANTS.  As mentioned above, this was a two breakfast spot, and I had my favorite almond croissant to go, because I couldn’t pass up an egg sandwich on a croissant either.  Problem solver right here, that’s what I am. 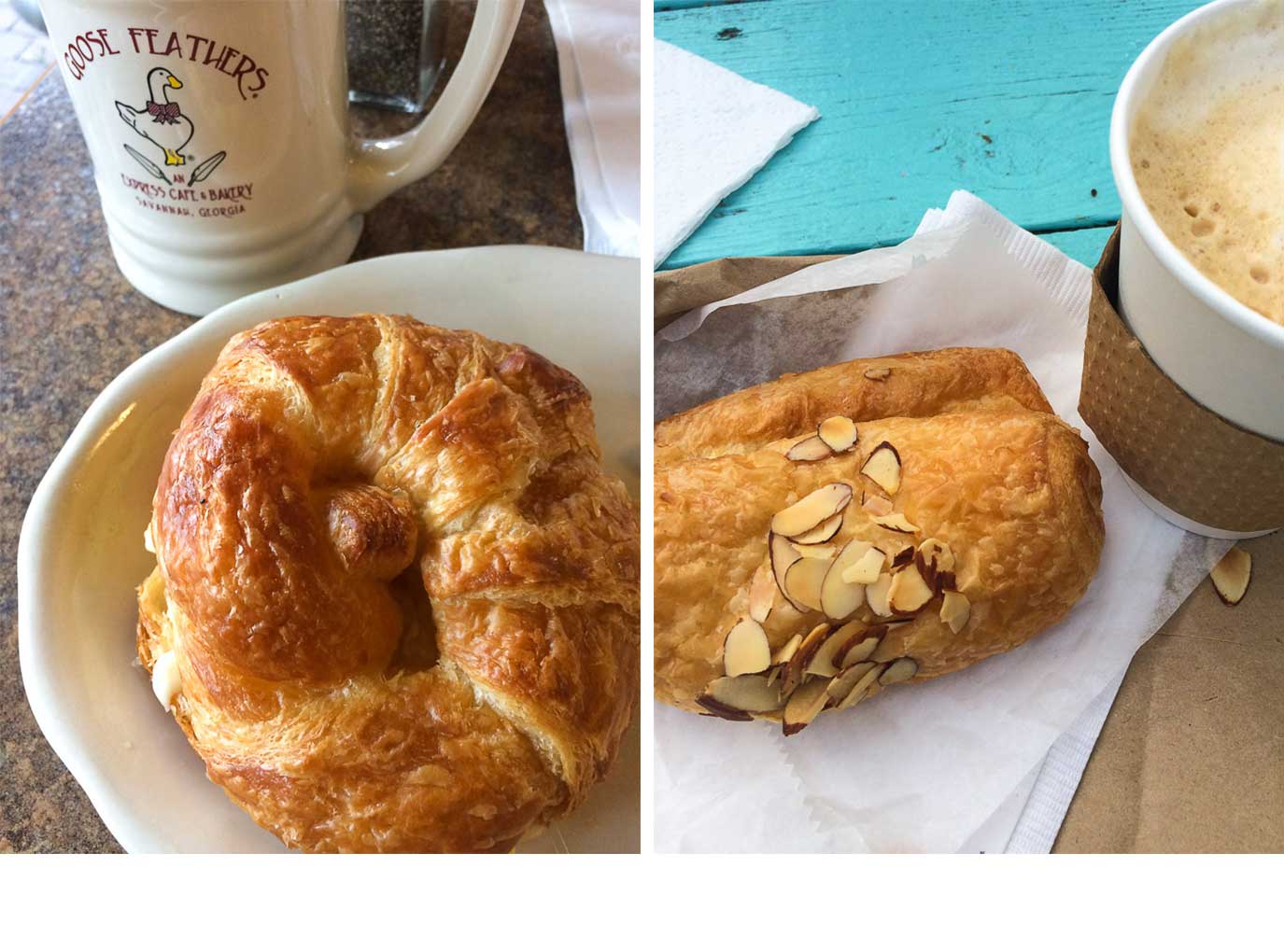 Alligator Soul – While we didn’t actually eat here, we tried.  My only regret in not planning dinners in advance, because they were booked straight through the night, and my kind of place.  Next time, Savannah, next time.  So if you get a chance to go before I do, make some reservations and let me know how it is!

If you’re looking for a vacation full of history, beautiful sights, amazing restaurants, and a down-to-earth feel, Savannah should be high on your list.  I can’t wait to get back and explore even more of this quaint city! 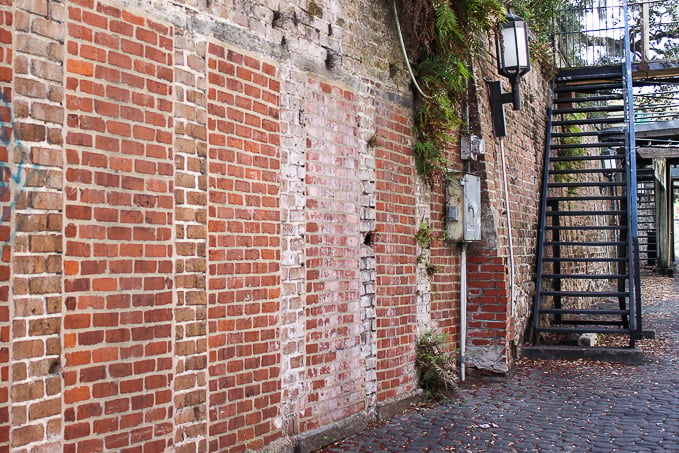 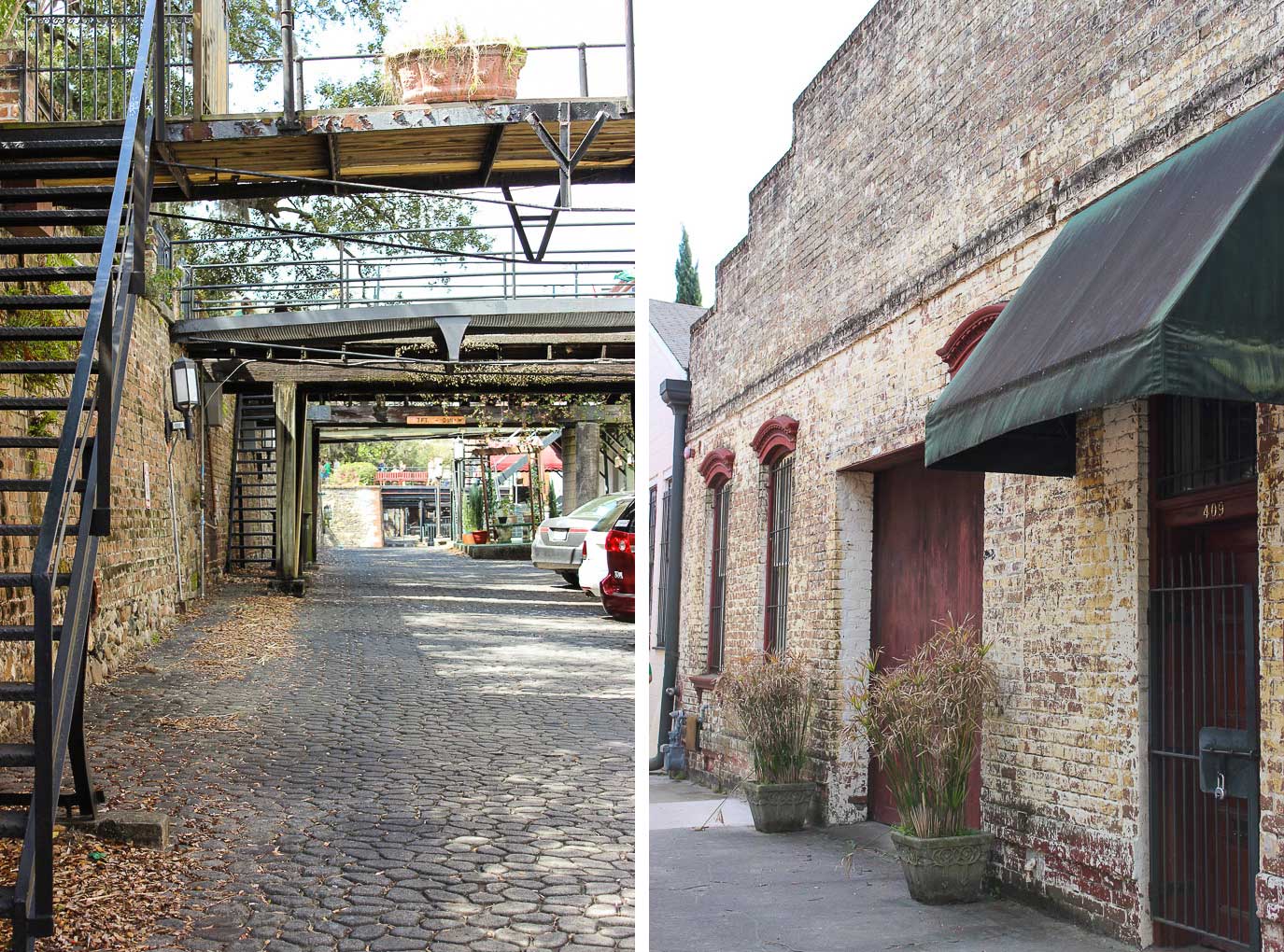 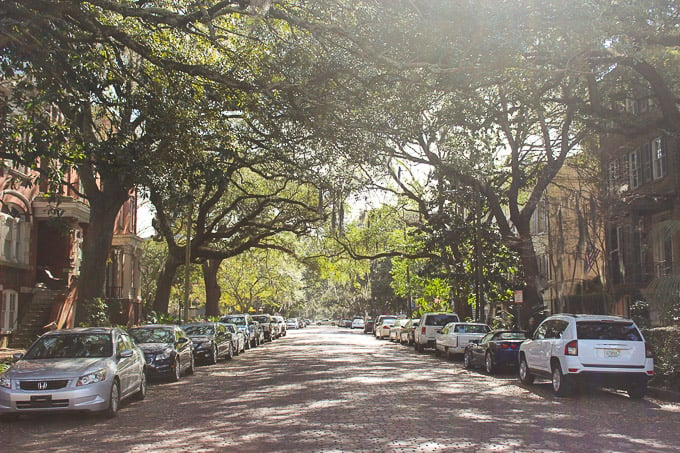 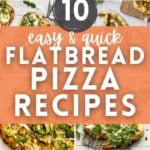 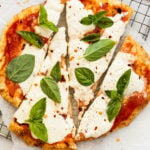 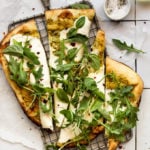 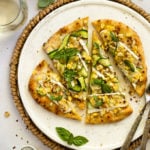 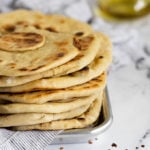 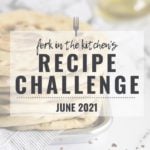